Beautiful! 😍 Very pleased with the quality! Looking forward to my next purchase. Thanks!😊 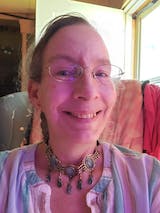